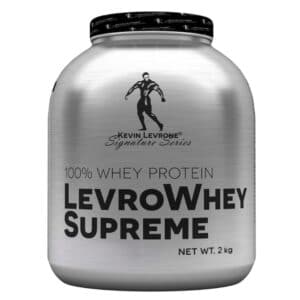 LevroCrea is an advanced formula especially recommended for athletes and people who are physically active or in periods of increased physical activity. Every portion provides the body with 6 g in 4 different forms of creatine: creatine hydrochloride, tricreatine malate and creatine monohydrate. Various forms of supplementation allow to provide the body with creatine in all possible ways, and furthermore contribute to a diversified kinetic release of creatine molecules.

Creatine is one of the most popular and important dietary supplements among athletes with a widely studied scientifically proven effect. Creatine increases physical performance in successive bursts of short-term, high intensity exercise. The beneficial effect is obtained with a daily intake of 3 g of creatine.

The product is recommended for adults performing high intensity exercise, especially during periods of prolonged endurance and strength trainings.

Different creatine forms supply the body with a number of important chemical compounds which are attached to each of the forms of creatine which contributes to a varied kinetic reaction in the release of creatine molecules. LevroCrea is what hardcore body builders and power lifters choose to increase physical performance and achieve their goals!

Tricreatine malate is a compound formed by the combination of 3 particles of creatine with 1 particle of malic acid. In natural conditions creatine malate has a better solubility in water than monohydrate, and it also shows a higher chemical stability, due to which it is more resistant to the acid environment of the digestive tract. Furthermore, the malic acid present in the tri creatine malate takes part in the transformation of the carboxyl acids in the body, in the Krebs cycle leading to the formation of ATP, that is the energetic substrate for working muscles.

This is a form of creatine stabilized by hydrochloride. By means of such combination the scientists have obtained a creatine particle which has a better water solubility than the creatine monohydrate, which allows for a better ingestion of the particle in the organism. Additionally, creatine hydrochloride is characterized with stability in any environment: acid, neutral and alkaline. A stable creatine particle does not need any buffering substances in order to go through the digestive tract, where the environment is changing from the acid in the stomach to the alkaline one in the duodenum. Creatine hydrochloride does not cause flatulence which accompanies supplementation, e.g.: with creatine monohydrate, and it does not require so called loading phase. The satiation of the cell plasma with HCI creatine takes place unusually quickly due to its high bioavailability. Creatine hydrochloride improves the physical efficiency in the cycle of successive, short, very intensive physical exercises.

Creatine monohydrate, which is one of the best known diet supplements for sportsmen all over the world with scientifically proved effects. In physiological conditions the human body produces creatine by itself from 3 amino acids: arginine, glycine and methionine which is further transformed into phosphocreatine which, in turn, is responsible for producing ATP, the quickest accessible source of energy for intensively working muscles.

Chelate is a creatine particle chelated by means of magnesium ions. Creatine is a relatively small particle, not being an amino acid, which occurs mainly in the body in muscles and which takes part in a number of cell processes there, including its use in the muscle protein synthesis. Creatine is probably the best known and the most popular supplement in the diet of professional athletes but also for occasionally practicing amateurs. Creatine won its fame in the 90’s of 20th century as a natural method for improving sports results and for building a fatless body mass. Presently, it is recommended in the endurance workout for short but intensive physical exercises, where an increase of the endurance was observed by adult practitioners at the consumption of 3g of pure creatine a day.